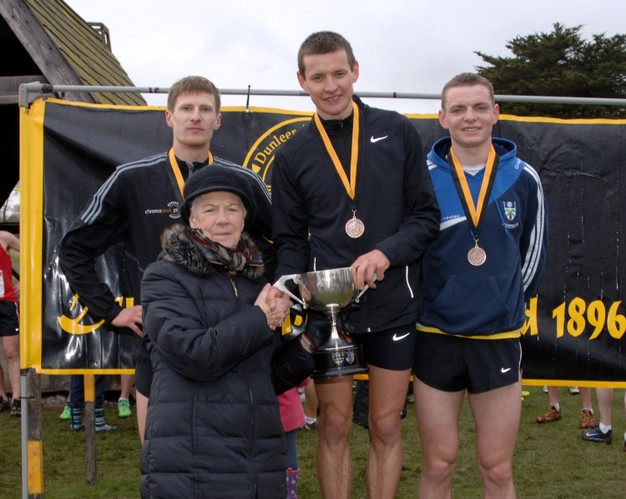 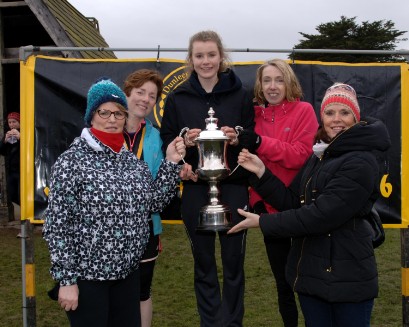 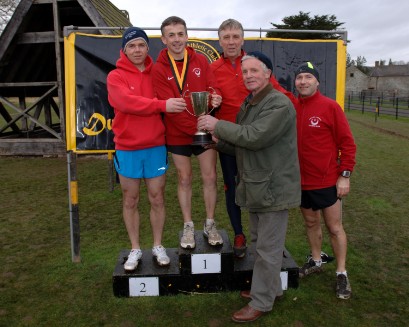 Pictured below: Bradley's Pharmacy manager Orla and juvenile athlete Aoife Fay with one of the prizes as sponsorship for 2012 Noel Mc Guill/Sandra Floyd Memorial Cross Country


The Committee would also like to thank the Louth GAA board for providing the wonderful Darver amenity for this Cross Country event. The course is much enjoyed by the athletes and the facilities are excellent.

Thanks also to the Mc Guill and Floyd families for their continued support, to Tom Neary our starter and to all who help out annually at this event, giving their time and energy to promote athletics.

The senior ladies' Sandra Floyd memorial cup went to the local ladies from Drogheda & District, with the Dunleer AC team in 2nd place, led home by the very talented Sarah Haak who finished in 2nd place overall, with the winner of the ladies race Fiona Mahon hailing from Donore Harriers in Dublin. The race was run over a lovely cross country course at the superb Darver facility, with Clubs from all over the country competing, from North Belfast, Lusk, North Laois, Glenmore, Ardee, Boyne, Drogheda and District, Dun Dealgan, Mountpleasant, North East Runners, Rathfarnham, Donore Harriers, Raheny, Newry AC, St. Gerards, all contesting the titles with high quality fields of athletes enjoying a feast of cross country running.

The Dunleer AC Committee would also like to thank the Louth GAA board for providing the wonderful Darver amenity for this Cross Country event. The course is much enjoyed by the athletes and the facilities are excellent.

Thanks also to the Mc Guill and Floyd families for their continued support, to Tom Neary our starter and to all who help out annually at this event, giving their time and energy to promote athletics. Many thanks also to Bradley's Pharmacy for sponsoring two televisions for the winners of the men's and ladies' races, and to Torris' Pat's Gift Shop for supporting the other prizes.

The juvenile races were well contested with a fun run for under 7's starting the day. Oisín Cheshire got the Club off to a great start with a super run just ahead of teammates Seán Mc Evoy in second, and Robert Matthews in 5th. In the girls under 7 Mary Lynch led the Dunleer AC girls home in a super 4th place.

The girls under 9 race was keenly contested with Nessa Reilly from Blackrock just taking the title from Grace Fitzpatrick Dunleer AC. Blackrock were first team with Dunleer AC 2nd. The boys under 9 was another great race with Tom Matthews from the host Club Dunleer in 3rd place leading his team to victory, closely followed by Patrick Farrell and Michael Casey.

The girls under 13 had a convincing winner in Seaghna Campbell from Dunleer running a strong race in this 1500m event, leading the Dunleer girls' team Seoda Matthews, Emma Cheshire and Aoife Howard to 3rd place. The boys under 13 had a 6th place finisher in Dermot Mc Keown with Liam Connaughton in 10th.

In the girls under 15 and 17 race Niamh Murray from Dunleer AC was a winner once again, with team mate Kirsty Mc Donnell showing great form and finishing in 5th place overall. Meanwhile Dunleer had another winner in the boys under 15 event in Gary Campbell, with Club mate Jamie Curtis in 2nd place. The Dunleer AC boys were first team, with Jack Boylan, Ciaran Connaughton, Shane Cheshire, Rory Meehan and Dylan Browne completing the Dunleer AC team line up.

Dunleer AC's athletes were in action at the weekend at the Darver GAA grounds and performed to a high standard across the board. Host Club Dunleer AC were delighted to win both the men's senior Noel Mc Guill memorial cup and the senior ladies' Sandra Floyd memorial cup, over a lovely cross country course at the superb Darver facility. Clubs from all over the Province came to contest the titles and high quality fields of athletes enjoyed a feast of cross country running.

Carl Dunne, fresh from his under 19 Leinster title win last Sunday led the Dunleer men home to victory ahead of Drogheda & District AC and lifted the Noel Mc Guill Cup presented by Barney Mc Guill, brother of the late Noel Mc Guill. Carl finished in 3rd place overall behind Tommy Evans Of Gowran AC and Rory Mc Donnell Dunboyne AC and was supported by Dunleer AC teammates Fintan Reilly and Shane Walsh in 4th and 5th respectively, with Sean Carpenter 8th and Aonghus Rooney in 9th, Mark Garland 11th and Mark Carroll 13th and Paddy Fitzpatrick 18th. David Carrie was first man home in the over 40 section, while Micheal Mulligan was first home over 50. Ian Carroll helped the Dunleer men to 2nd in the masters' team event. Also running well were Aaron Goring and Norbert Feeney in the junior men's.

The Dunleer AC ladies also ran strongly and produced a great team effort to win the ladies' team event ahead of Drogheda & District. The Dunleer AC ladies proudly accepted the Sandra Floyd memorial cup from Ann Floyd, sister of the late Sandra, with Laura O Driscoll leading the way home in 4th place ahead of Geraldine Finegan in 5th, Deirdre Duffy in 6th and Sandra Doheny in 9th place.

In the girls under 13 race Ellen Campbell ran strongly to 8th place, while in the boys under 13 Jack Boylan was a fine 3rd for Dunleer AC, with Dylan Brennan 6th and Shane Mc Cann 9th earning the boys silver team medals.

Niamh Connaughton earned a 6th placing and individual medal under 15, while Sarah Haak was 5th in the girls under 17 section. The boys under 15 produced another winner for Dunleer AC with Aonghus Meehan 1st and in the boys under 17 race Aaron Hanlon led his team home with an individual win ahead of Sam Bingham in 2nd and Ciaran Connaughton in 7th place. The Dunleer AC boys won the team event with maximum points.

A great day of cross country running took place at the Louth GAA grounds in Darver on Sunday 15th November, with great participation from boys and girls, men and women, starting with the fun event for under 7s right up to senior and master's races, and a 2km Fit4Life run for joggers and runners.

The annual cross country event honours the memory of two fine Dunleer AC athletes who tragically lost their lives while in their prime, Noel Mc Guill in a cycling race accident and Sandra Floyd in a car accident. Both athletes were represented on the day once again by family members with Noel's brothers Larry Mc Guill and Barney Mc Guill and their families there to present the Noel Mc Guill Cup, and Sandra's sisters Joyce and Ann presenting the perpetual Sandra Floyd Cup.

The Dunleer AC Club is indebted to Bradley's Pharmacy, Dunleer for sponsoring two televisions for the winners of the ladies' and men's races. Thanks goes to Ceann Chomhairle Deputy Séamas Kirk for opening the event with words of encouragement and also to Louth GAA County Board for kind permission to host the event at this excellent course, impeccably marked out by Tom Neary and his team.

Martin Quinn, Dunleer AC continued his success over the country when he came home a clear winner of the annual Noel Mc Guill memorial cross country over 6,000 metres at Termonfeckin on November 16th. Martin won a keenly fought race over heavy conditions making a last lap drive for home from Rory Mc Donnell Dunboyne who shared the lead with Quinn for most of the race. Martin got a tv for his troubles, sponsored by Bradley's Pharmacy in Dunleer. Eight years ago he won the tv over the Shamrock Hill course and injury has deprived him of his athletics career since he led his Club home to return the team title with David O Brien in 3rd place.

Fiona Roche made it a great local double when she proved just too strong for a good class field with Aine Cotter in 3rd place to retain the Sandra Floyd Cup with Sinéad Kelly and Kelly O Reilly. The ladies' masters team also claimed the team title in their section with Geraldine Finegan in 9th and Sandra Doheny finishing 12th overall and leading the ladies home, with Jacqueline Matthews in 17th completing the team.

The promoting Club had some outstanding performances winning the junior men, led home by David Lambe in first and John Bingham 3rd to win the team with Fergal Barnes.

In the boys under 17, Dunleer filled the first 4 out of 5 athletes home, with Shane Farrell winning from Aaron Goring and Carl Dunne with Justin Ferris 5th. Aaron Hanlon had a great victory in the boys under 15, while Sarah Haak was a very strong 4th in the girl under 15. Aonghus Meehan also finished a great 5th in the under 13 boys.

The Boys under 9 was another terrific race with Kevin Ledwith, Dunleer AC coming home the winner, with Blackrock AC athlete Aiden Kirwan 2nd and Colm Farrell from Glenmore AC in 3rd.

In the Girls under 9, Emma Cheshire from Dunleer ran a great race, coming home in first place followed home by teammates Seaghna Campbell in second and Ciara Butterly in third.

The Fun Run was a great event for kids with Kyron Kelly from Dunleer coming home second in the boys' race. 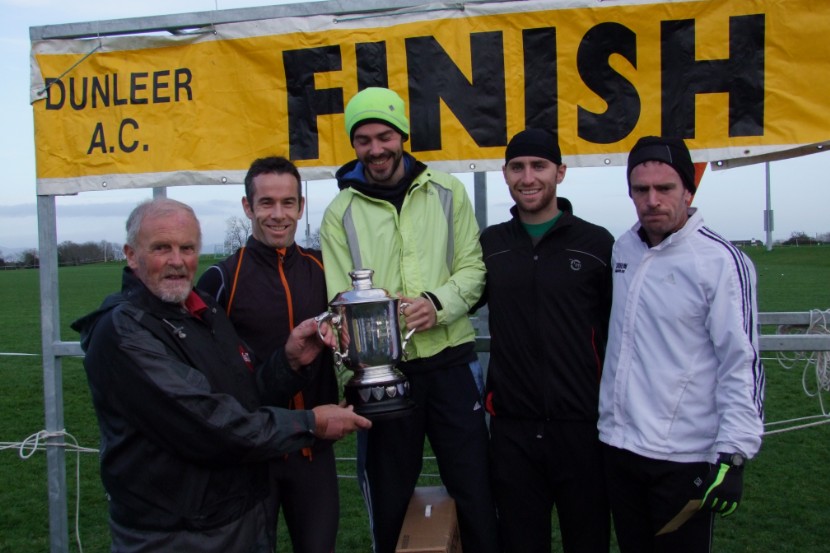